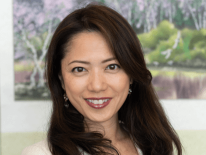 Shirley Kwan-Hui, Interim Director of the Department of Licensing and Consumer Protection (DLCP)

As the newly appointed Interim Director of the Department of Licensing and Consumer Protection (DLCP), Shirley Kwan-Hui is a seasoned administrator who brings over 20 years of executive leadership experience in across both the public and private sectors.

Most recently the Deputy Director of the Department of Consumer and Regulatory Affairs (DCRA), she served as the strategic advisor to the agency Director and ensured successful execution of policies, strategies, and operations across the agency.  She was responsible for overall agency performance and data management, the Office of Information Services (OIS), operations, and administrative functions including budget and finance, procurement and contract management, human resources, facilities, and risk management. Also, she oversaw special and consumer protection investigations, customer service and account management.

Before joining DCRA, she was the Chief of Staff for the Department of For-Hire Vehicles (DFHV) having previously served as the Chief of Operations. At DFHV, Shirley managed day-to-day operations and implemented strategic initiatives for the agency .

Earlier in her career, she was the Program Manager of Agency Performance Accountability at the Office of the Chief Technology Officer (OCTO). There, she managed the agency performance, grants, and audit functions.  She was also the TechStat Program Analyst for the Strategy and Special Operations Division, OCTO, where she also led strategic planning and policy development.

Prior to joining the District of Columbia government, Shirley served as the Assistant Treasurer and previous as the Senior Accountant, Asset Servicing Global Operations at the Bank of New York Mellon. At Deutsche Bank, she also served as the Client Accounting and Reporting Administrator.

Shirley received a B.S. in Business Management, with a concentration in Finance, from the Binghamton University, State University of New York. Additionally, Shirley is a graduate of the District’s Executive Leadership Program (ELP).